This story is from America, but it’s so unusual that I just had to cover it here.

The relationship between casinos and players is a funny one. As players, we love and hate casinos at the same time, and ultimately spend a lot of our time crossing our fingers for them to lose.

The casinos, on the other hand, love their players, because without them they wouldn’t make any money – but they are certainly not rooting for us.

Imagine then if you had unwittingly won a huge sum of money without realising it and just walked off assuming you had lost.

Would you expect the casino equivalent of a waiter chasing you to your car to tell you that your phone had been left on the table?

This casino went a bit further than that. 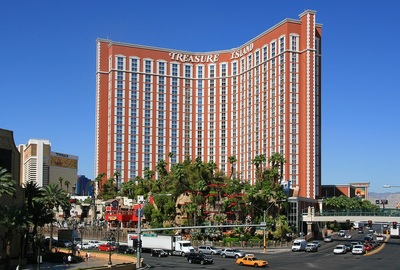 The Treasure Island casino is in Las Vegas, located right there on Las Vegas Boulevard.

It attracts thousands of tourists every year, and it was one of these holidaymakers who had the good fortune to trigger a massive jackpot on one of the casino’s slot machines.

However, due to a machine malfunction neither the player nor the casino were alerted that the jackpot had been triggered, and the player eventually stopped playing and went off to do something else.

The error was picked up but it was way too late to alert the player that they had just wandered off leaving a suitcase of money worth $229,000 behind.

However, the progressive jackpot had been won as far as the system was concerned, meaning the payout had reset to the seed amount and the casino had a spare $229,000 but no one to give it to.

Being a well behaved casino, the Treasure Island bosses got in touch with the Nevada Gaming Control Board (NGCB), who are the regulating body in the state, and the search was on.

The Search for the Jackpot Winner

Since all slot machines are now very sophisticated, every spin and result is logged automatically and electronically, so after some fairly simple sleuthing the winning player was found on the casino’s CCTV.

However, identifying the man and finding out how to contact him was a much tougher task.

It took 3 weeks to figure it out, but with a combination of CCTV footage from several different venues, game records, electronic purchase records, witness interviews, and even ride share records, it was possible to zero in on the lucky player and figure out his contact information.

His name is Robert Taylor, a man from the neighbouring state of Arizona who had been playing the game on January 8th of this year.

James Taylor, chief of enforcement of the NGCB and no relation to the winner, Robert Taylor (honest), said:

“I commend the agents of the enforcement division … for ensuring that the public trust in the gaming industry remains strong by spending countless hours over two weeks to ensure that a patron is awarded winnings owed to him.

Taylor got the good news on the 28th January, and is due to go back to Las Vegas to collect his winnings soon.

Let’s hope he doesn’t stick around long enough to lose any of it again!